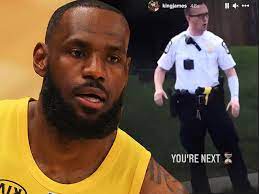 “YOU’RE NEXT #ACCOUNTABILITY,” the NBA icon wrote with an hourglass emoji over an image of one of the officers at the scene of Bryant’s shooting…

“Lebron James is inciting violence against an Ohio police officer. This is disgraceful and dangerous. Is the NBA okay with this? Is Twitter?” Sen. Tom Cotton, R-Ark. asked.

“On behalf of pro athletes, current and former, I apologize for how #LeBronJames just showed his inner Maxine Waters and made a very real, ongoing threat to the life of the officer who quickly acted to prevent a knife attack from becoming worse. Many of us appreciate what LEOs do!” former Major League Baseball player Lenny Dykstra wrote.