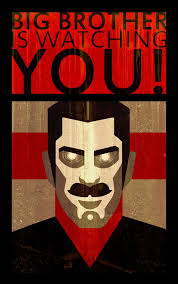 Oh good. They’re going to privatize 1984. Ten to one Republicans get behind this and applaud that private companies are now spying on Americans.

“The Biden administration is considering using outside firms to track extremist chatter by Americans online, an effort that would expand the government’s ability to gather intelligence but could draw criticism over surveillance of US citizens.

The Department of Homeland Security is limited in how it can monitor citizens online without justification and is banned from activities like assuming false identities to gain access to private messaging apps used by extremist groups such as the Proud Boys or Oath Keepers.

The plan being discussed inside DHS, according to multiple sources, would, in effect, allow the department to circumvent those limits. A source familiar with the effort said it is not about decrypting data but rather using outside entities who can legally access these private groups to gather large amounts of information that could help DHS identify key narratives as they emerge.