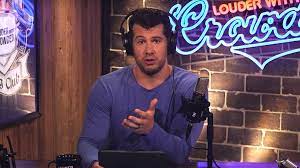 YouTube has once again suspended BlazeTV host Steven Crowder’s channel, issuing a second “strike” against the comedian for reportedly violating the platform’s harassment and cyber bullying policies with a video on the tragic shooting death of Ma’khia Bryant by a police officer.

POLL: What scares you the most?
Crowder’s April 21 show was removed from YouTube. The episode covered how 16-year-old Bryant was attacking another person with a knife before a responding police officer fatally shot her. Crowder and his co-hosts argued that the shooting was justified, making jokes about the circumstances of the shooting. According to YouTube, Crowder’s commentary crossed a line that violated its Community Guidelines.

“YouTube Creators share their opinions on a wide range of different topics,” the company said in a statement to Crowder’s team. “However, there’s a line between passionate debate and malicious harassment. Content containing targeted harassment including, but not limited to, stalking, threats, bullying, and intimidation is not allowed on YouTube.”