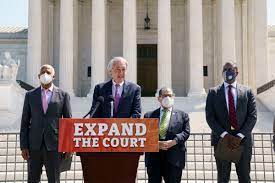 If pro-lifers lose, it will be devastating. Pro-lifers have worked for years to elect Republican presidents just so they could nominate judges. Out of the nine justices on the court, six were nominated by Republicans. Mission accomplished, right? But that, as we know, means little. Because we all know Justice John Roberts has effectively become one of the most liberal justices on the court.

One thing is for sure. If the left loses this court case they will view it as the starting gun to packing the court. The media will join in and the politicians will weep and gnash their teeth about the politicization of the high court. And then they will go about adding at least two extreeeeeeemely liberal judges to “fix” the court. This will destroy any confidence Americans hold in the court.

The weird part is that all the justices know all this. The very idea of packing the court hangs over the entire proceeding. Joe Biden has said as much.