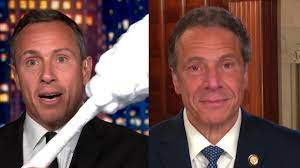 The cable news anchor encouraged his brother to take a defiant position and not to resign from the governor’s office, the people said. At one point, he used the phrase “cancel culture” as a reason to hold firm in the face of the allegations, two people present on one call said.

The behind-the-scenes strategy offered by Chris Cuomo, who anchors CNN’s 9 p.m. nightly newscast, cuts against the widely accepted norm in journalism that those reporting the news should not be involved in politics.