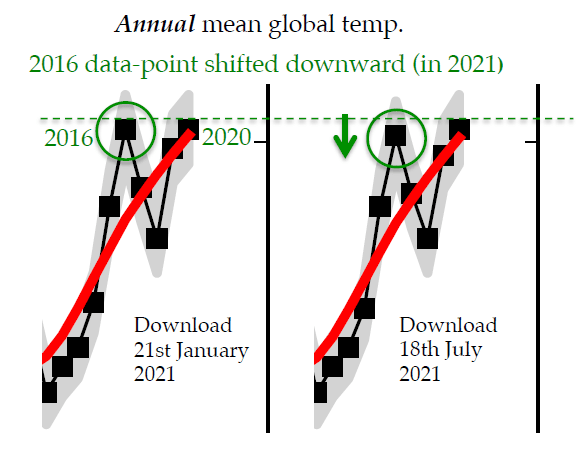 In what Dr Higgs calls yet another manipulation of the data, in early 2021, NASA discreetly lowered the 2016 global average temperature –previously the highest on record– to make the year 2020 seem like the hottest.

NASA play these ‘games of adjustment’ all the time, and each and every time, without fail, their tweaks support the man-made global warming narrative…

By reducing 2016’s annual temperature, government bodies have taken control of reality — they are able to fool the unquestioning masses into believing global average temperatures are linearly increasing and have increased since 2016, when the very opposite is true.

In actual reality –where those that apply critical thinking and logic reside– Earth’s temperature has dropped by approx. 0.7C since 2016 — this plunge is best reflected in datasets which aren’t subject to government data-fudging adjustments, such as the UAH satellite, which is maintained by former NASA scientist Dr. Roy Spencer: